This past weekend, the fourth week of the build out, I started suffering project fatigue. This is partially due to the difficulty of hanging the walls panels by myself (Rajo was out of town playing hockey) and partly due to the inclement weather we have been having. We are having a hard winter  in Bend, OR. It started snowing on Dec 8th and hasn't really stopped. Its not uncommon for Bend to have snow in December, but it is very uncommon to have it stick around in town for more than a week. The snow that fell in December just recently melted out, though there are still significant patches in shady areas. I think its the longest I have seen snow on the ground in town in 20 years of living here and it continues to snow. 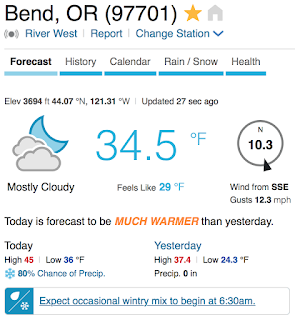 We have had two snow showery weekends in a row, which has made working on the van more challenging as I find working in the cold extremely tiring. This past weekend I erected my "easy-up" tent as a covered area to cut side panels. I don't like cutting in the garage as the sawdust gets on everything, especially the fine particulate dust created by cutting hardboard.  The weekend prior, Rajo and I made templates out of cardboard for the areas we wanted to cover with hardboard panels. I choose hardboard for a couple of reasons: 1) Its relatively cheap, so screwing up isn't too costly. 2) We plan on glueing trunk felt to the outside of the panels to give them a "softer" feel, and it seemed like using plywood would be overkill. 3) If it doesn't work, we have a nice set of templates ready to go for some other material.

We chose to install the panels to fit into the sections between the main ribs on the sides of the van. One person I talked to suggested that it would be easier if we framed the sides so we could cover the entire wall but I wanted easy access to the wiring and the side ribs and struts for cabinet attachment. I believe he was right about that but I still prefer to have the ribs accessible for future expansion. We will cover the exposed metal with trunk felt once we are fairly happy with the setup. 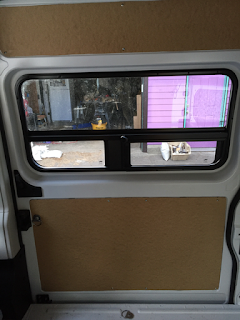 Installing the panels was more challenging than I had expected. I chose to attach them to the walls with M5 rivnuts instead of self tapping screws. I really like the idea of using the rivnuts as it allows for relatively easy panel removal if/when needed, however getting the holes aligned on the panels was a huge pain. After many bad alignment which caused me to re-drill the holes or slightly expand 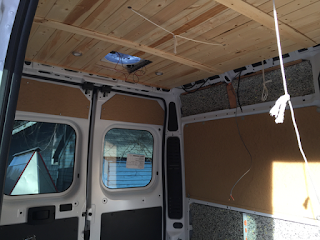 the holes I came up with a  slight better method, though still imperfect. I used a very fine drill bit to drill tiny pilot holes and then I could align the panel holes with the center of the rivnuts before making a mess by drilling several holes in a single area. Its very time consuming but it turned out ok. I didn't get all 13 panels installed.  I began getting a little fatigued, frustrated and cold so after getting the 3 panels on the driver's side front of the van, slider and back doors, and center side panels in the rear of the van installed, I decided to switch to electrical for a few hours. 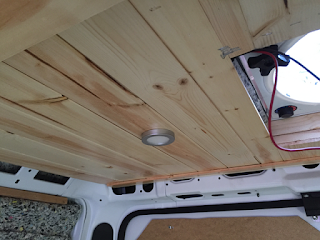 I am pretty confident with my simple electrical setup: 8 LED puck lights, a fan and 3 12v/USB plugs. We aren't going to use solar initially, rather I purchased a Battery Doctor battery isolator. I built a distribution panel out of 3/8" ply, painted and attached with rivnuts to the back side of the drivers seat  mount. I started by completing the circuit to the fan, which I had attached to the wire run a few weeks ago. I had a hiccup with that wire run, I hadn't tested its continuity and when I terminated it and applied power ... nothing. So I cut the butt joints out and did a continuity tests... needless to say, it failed, I had a bad wire pull or I cut it somehow during the installation. Fortunately, before we installed the ceiling I decided at the last minute to pull an additional wire back as an auxiliary. So I tested that run, it was good. Advice for those who follow, test your continuity when you pull the wire, it will save you last minute grief!

After sorting out the fan wiring and testing with my 12V bench test power supply hooked up to the distribution panel, I moved on to installing the rear set of LED puck lights. I had decided to wire in parallel so I had to attach one side, then pull a lead through the ceiling to the second light. We pulled some rope into the holes we had drilled in the ceiling last weekend, so pulling the wire was easy as tapping the end to the rope and pulling through. I learned this technique pulling CAT 5 cabling many years ago. I terminated the in wall wire run to the lighting wire and turned on the power ... Oh sweet light!

We have a goal of having the van ready to camp in for the last week of March, our spring break, for a motorcycle trip. We had hoped to have the insulation, walls, ceiling, floor and electrical done, along with a bed platform. I realized this weekend that its an ambitious goal since I haven't been able to do as much work in the evenings as I thought due to the cold and general exhaustion of an 8 hour work day. I think the pressure of getting everything done has been adding to my burnout so I am scaling back our expectations. One thing we can take of the list is having a completed floor. I will get sub flooring in but the floor covering I ordered from AmericanFloorMats.com won't arrive in time. I didn't see the 4-6 week lead time anywhere on their site, but apparently that is the case. Another thing I can punt on is the bed platform. I have a specific long term concept but was going to make a short term platform spanning the back of the van, suspended on the sides by 2x6 rails attached via rivnuts to the rear side ribs. Rajo agrees that we can throw our mattress on the floor for our trip at the end of the month, so we can focus on finishing the paneling and electrical work without killing our joy of the build. I have to remember this is about having fun!!!
Posted by W7MTB at 6:59 AM